The Trinidad brand was first produced in 1969 at the El Laguito factory in Havana.
In the early 90's, the cigar received much attention in Cigar Aficionado after an interview with Avelino Lara. The Trinidad cigars were used for gift purposes by the Cuban Government for a long time. Later on the Trinidad was launched to the public in just one size, the Fundadores. These cigars are made at Cohiba's exclusive El Laguito factory the home of Cohiba.
Trinidad cigars are 'totalmente a mano, tripa larga', totally hand made, long filler. 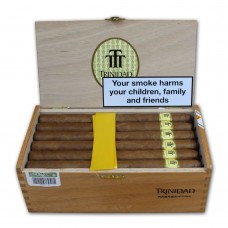 This cigar came out in 1997, and it was originally made for diplomatic gifts. One of the most “ele..