The brand was founded by Jose F.Rocha and appeared on the market in 1901 despite the brand was not registered until 1921 by the ownership of Rocha’s firm. The brand name “ BOLIVAR” comes from the most important historic figure of the 19th century who is Simon BOLIVAR.
Simon Bolivar was a General and at the same time a great revolutionary hero who freed South America from Spanish rule. All these things took place in history, proved him as the powerful figure in Latin America.
In 1901, the Rocha company began producing this brand in Havana(Cuba) at the Partagas factory which is main factory for this brand today. The brand, just like the figure BOLİVAR, is blended to be robust, strong and a hero among its competitors. The Cuban-produced Bolivar cigars are very full-bodied, with significant ligero in the blend and have been some of the strongest and most full-bodied Havana cigars, therefore Bolivars are not recommended for new cigar smokers.
The Rocha Cigar Company is also known for producing world’s smallest cigar called the DELGADO. measuring only 1 7/8 inches by 20 ring gauge, the smallest of the Havanas. 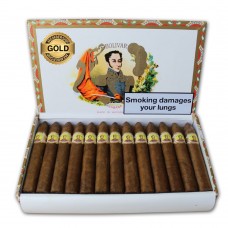